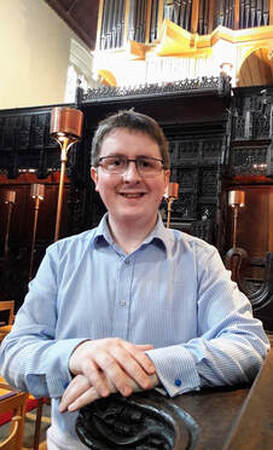 Paul Hayward is an experienced and qualified musician, specialising as an organist, choral director and composer. He holds a Master of Music (MMus) degree in choral composition from the University of Aberdeen, and he continues his part-time studies there with Professor Paul Mealor towards a PhD in composition, having been awarded a Carlaw-Ogston scholarship. Paul spent two years as the composer-in-residence at St Wulfram’s Church, Grantham, and his compositions have been performed across the UK and further afield.

Paul graduated with a Bachelor of Music (BMus) degree from the University of Wales, Bangor and holds a variety of diplomas, including achieving a distinction in the Licentiate of Trinity College, London (LTCL) organ performance examination, and the rarely-award Fellowship of the Guild of Church Musicians (FGCM) by examination. He refined his conducting studies with Neil Ferris and Peter Broadbent on the Association of British Choral Directors’ course for advanced conductors, resulting in the award of the Licentiateship of the Royal Schools of Music (LRSM) in choral conducting.

Paul was the inaugural holder of the joint assistant organist post between Brecon Cathedral and Christ College, Brecon. During this time, he was also the assistant director of music for the Brecon Singers, taught piano and music theory at Christ College, and took part in tours, recordings, broadcasts and a royal visit. Prior to this, Paul was the assistant director of music and conductor of the cathedral youth choir at St Barnabas Roman Catholic Cathedral, Nottingham, working as an organist and conductor with the cathedral choir, university choral scholars (Schola Cantorum) and the diocesan choir. As an organist, he has given solo recitals at cathedrals and churches across the UK and has experience performing with chamber orchestras in early music and in chamber arrangements of works including Mussorgsky's Pictures at an exhibition and Mahler's Fourth Symphony. The lighter end of his work has included theatre productions including Les Miserables, Bugsy Malone, Joseph and the amazing technicolor dreamcoat and Oliver! playing keyboards as well as involvement as an MD or rehearsal pianist. His organ teachers have included John Keys, Colin Walsh and David Briggs.

Paul has been the musical director for the Ruddington and District Choral Society since January 2016, conducting a variety of concerts with the choir, its own chamber orchestra and soloists, both professional and students in association with the University of Nottingham. Recent works have included Purcell’s Dido and Aeneas, Bach’s Magnificat, Haydn’s Nelson Mass, and a collaborative project of Mendelssohn’s Elijah with the Djanogoly Community Orchestra, Burton Joyce Choral Society, Nottingham Hospitals Choir and professional soloists in May 2019.  Paul is also the musical director for Coalville Male Voice Choir. Previous appointments include the Cranmer Company of Singers as organist and assistant director of music, the Chesterfield Bach Choir as musical director, the saraBande chamber ensemble as guest conductor, and the choir and orchestra of the University of Wales, Bangor Music Society as musical director. He is experienced in leading ‘come and sing’ events on such works as Faure’s Requiem, Handel's Messiah, and Mozart’s Coronation Mass. 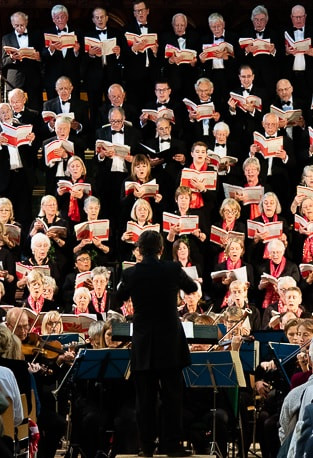